The Internet is an amazing tool for communication and has enabled people in need to seek and accept contributions from people they could never reach before.  Unfortunately, this has also led to a considerable amount of fraud, particularly in the category of “first responders.” Claiming to be a first responder immediately gives you a level of attention and sympathy not afforded in more generic cases. As a result, many of the campaigns seen on large donation sites, upon closer examination, turn out to be frauds. Fund the First is creating a platform and community to combat that fraud and provide actual first responders a trusted place to seek the assistance they deserve.

First responders put themselves between the worst moments in humanity to save the innocent, they are the ones who run toward danger, not away from it.  Law Enforcement Officers, Firefighters, EMS, Military, and more risk it all with little to no support when it comes to their personal lives.

According to several industry groups, right now in the United States, there are:

More so than in “normal” professions, illnesses, surgeries, and other catastrophic losses occur more often and the costs (financial and personal) are that much greater.

First responders are the first line of defense, holding the line between order and chaos. When a member of the community is in need, a first responder answers the call to action.  Law Enforcement Officers, Firefighters, EMS, Military, and others risk it all with little to no support when it comes to their personal lives.

Our goal here is to build a solid base to reach the community and provide the communication, resources and tools to reach your goals.

Section III: Fund the First Board of Directors

Robert’s drive and passion for the first responder community has lead him to co-found and develop this organization after seeing firsthand the hardships that are faced both on and off duty.  His goal as President is to provide a secure space for first responders and their family to request help in times of need.  Currently, he is a decorated detective with the New York City Police Department for the past 11 years where he specializes in complex investigations.  During that time, he has developed numerous working relationships with various organizations and charities.  Robert has credentials with the Department of Homeland Security, the Drug Enforcement Administration, and is an expert witness to the Office of Special Narcotics New York.  Prior to his career, he attended New York Institute of Technology where he majored in criminal justice and played outfield for their Division I baseball program.  Robert also volunteers as a baseball coach and AED Director for Massapequa Coast Little League.

Michelle is currently an Officer and Comptroller for a public benefit corporation in the state of New York.  As the CFO of a $150M corporation consisting of over 160 plus employees, she has custody of all funds and properties of the corporation and is responsible for maintaining accurate books and records, monitoring internal controls and preparing financial reports.  She is also a founding partner in a CPA firm in which she specializes in managing client relationships as well as identifying new business growth and development opportunities.  As a lifetime resident of Long Island, her grandfather was a dedicated fireman and fire chief who inspired her to become a member of the first responder community in which she has served as a Treasurer for numerous fire districts throughout her career.  As Executive Vice President and Chief Operating Officer, Michelle will oversee all finance and accounting activities ensuring transparency and accurate reporting.

Lou is a dedicated patriot with strong ties to the law enforcement and military community and is a former professional baseball player.  Currently, he is a coach for the baseball team at a local college.  He has been involved in numerous roles throughout his coaching career serving as a head coach, pitching coach, assistant coach, and recruiting coordinator.  Lou is a published writer and an active member in various associations, foundations and charities.  He has been a guest instructor, specialist, presenter, and speaker for some of the top clinics, showcases, organizations, and camps in the nation.  With this being said, his passion to help others and his leadership capabilities have been recognized by many.  As Chief Marketing Officer, he will seek to fulfill the mission of our organization.

Kevin is the Senior Vice President serving as the Chief Communications Officer of this organization.  He brings 15 years of law enforcement experience and is currently serving as a Lieutenant in the New York City Police Department.  Prior to his career in law enforcement, he earned his Bachelor’s Degree from Western Connecticut State University where he majored in communications with a minor in criminal justice.  While attending WCSU, he was a four-year member of the baseball team.  Kevin is the son of a retired firemen (FDNY), brother to a member of DSNY, and brother to Sergeant in the NYPD.

John has been a certified Law Enforcement Officer in the State of Florida for over seven years.  His current assignment is a dual purpose canine handler, as well as a part time SWAT operator for the regional SWAT team.  Prior to a career in law enforcement, John attended the New York Institute of Technology where he majored in Criminal Justice.  During his time at NYiT, he was a relief pitcher for the college’s Division I baseball team.  He graduated with honors in May of 2009.  As Chief Risk Officer, John’s experience as a member of the first responder community will help guide the organization to empower those in need.

The Fund the First Donation System is the core.  An online donation system, the Fund the First Platform will provide users with the ability to create, manage, and promote campaigns for good causes of all types.

One of the main reasons for creating Fund the First Platform is to minimize and eventually eliminate fraud related to first responder donations.   Some of the features unique to our platform include:

Membership: All types of people and organizations will be accessing the site and service.  Each group will have different levels of verification and capabilities based on their status.  This will allow us to provide important services to those in need while including everyone in the community.

Verification: One of the more important aspects of the service, ensuring people are actually first responders is key.  We are developing a system to ensure all members are verified so users know their donations are going to the right cause.

Campaign Verification: All campaigns to raise money will be verified by our team to ensure the cause is real and just.

Payment Distribution: With the goal of getting money into the hands of those that need it as quickly and efficiently as possible, we are working with our technical team and payment processing partners to minimize the amount of time people will need to wait for donations to get where they need to go.

How do we get there?

We are creating a culture that is inviting to all first responders. Using our own network and resources to start the initial launch of the company promoting our mission as listed above in the executive summary.  We will be professional and respectful to all first responders, their families, potential partners and sponsors.  Using our current roles, we will spread awareness and gain followers and supporters.

Key words to be implemented:

These highlighted days will be a driving force for us to increase revenue to offset costs of our expenses.

Weekly updates and monthly meetings to track progress and generate new leads for avenues of revenue and brand marketing opportunities will be implemented.

The graph below shows projections based on years ending 2019 through 2023.  The data encompasses total support and other revenues, total expenses, and change in net assets.  For more information and full spreadsheet of all information please contact [email protected]. 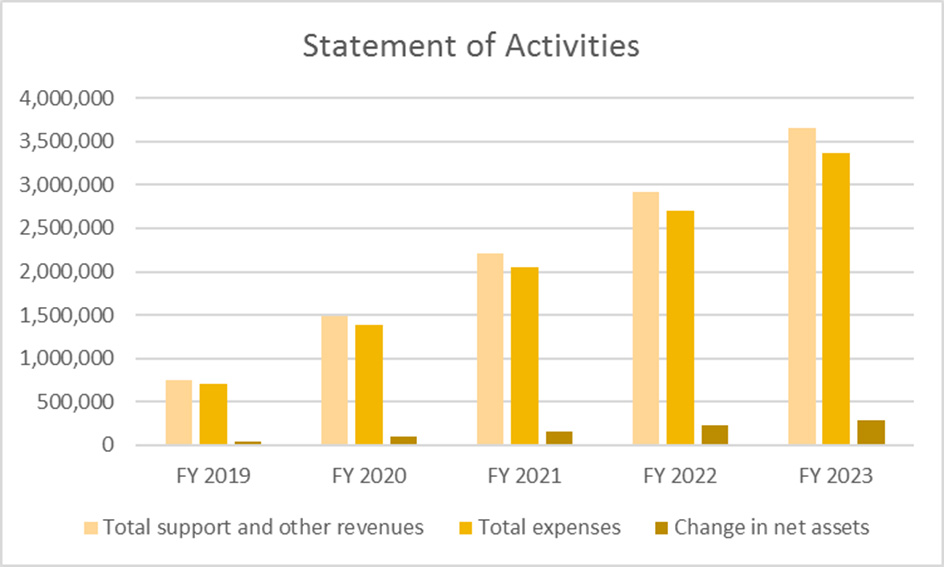 Each year we will be hosting countless events in addition to all the postings on our Fund the First Donation Platform.  We will be looking to raise funds through direct donations to gain as much support as possible.

By sponsoring Fund the First, you will be able to help us support our donation system and assist the countless number of first responders and their families who are facing tragedies.

We hope that we can count on your help to make all of our events and our platform the best it can possibly be.  Thank you in advance!

In appreciation of your anticipated donation, we would like to offer you the following based on the amount you donate: